Shrouded by mighty Himalayan hills, the entire North-East region – comprising the seven sisters (Assam, Arunachal Pradesh, Meghalaya, Manipur, Mizoram, Nagaland, Tripura) and Sikkim – is believed to be one of the most beautiful regions in South East Asia. The stunning and beautiful dense forests, lying in the foothills of Himalayan ranges are a natural home to a variety of wildlife. Besides, numerous lovely waterfalls, caves, fresh water lakes on the mountain top, seemingly endless winding roads on the mountains of the whispering winds, beautiful lushes green hills partially covered by clouds throughout the year are other attractions of the wonderful North-East India. Here you will find World Heritage Sites like Manas National Park and Kaziranga National Park.

India’s North East represents the richest ethnic region of the world, and meeting point of four major races (Aryan, Mongoloid, Austric, Tibeto-Burman) of the world, Nagaland and Nagas are known for the myriad tribes and rich culture and traditional systems ranging from the autocratic to “pure democracy”. It is believed that there are 64 Naga tribes living in four States (Nagaland, Manipur, Assam, Arunachal Pradesh) occupying the north easternmost parts of India as well as the North Western parts of Myanmar. In Nagaland State itself, there are 16 major Naga tribes.

North East India is one of the richest ethnic and bio-diversity regions of the world, with more natural affinities to the East than to its west. It was also, at one time, one of the main economic trade centres of the world providing the Southern Silk Route to China and other trade routes to East and South East Asia. Tragically, the region has had a history of being vitally and decisively affected by the actions of people from beyond the region, perhaps, because of its geo-political and strategic location

The North-East India is a collective name for the eastern most parts of India representing both a geographic and administrative division of the country. The region comprises eight states, namely Assam, Arunachal Pradesh, Manipur, Nagaland, Meghalaya, Tripura and Mizoram, commonly referred to as the Seven Sisters’ because of their interdependence on each other. On the other hand, Sikkim is geographically not a contiguous part of the northeast region. It is separated from the north east by Siligudi corridor. So t is theoretically not included in the ‘Seven Sisters’. However, Sikkim has happily taken up he role of being a little brother to the amazing seven sisters.

The north-eastern regions of India is a place of diverse cultures. The different communities and tribes of north-east India celebrate their unique festivals with great enthusiasm and joy. Many of these festivals are based on agriculture and no celebration is complete without traditional music and dance.

This beautiful land is home to diversified tribal groups – over 300 different tribes!, with each having their own distinct culture, languages, interesting dance forms and festivals, giving them a unique cultural identity. Brilliantly attired in their traditional, colourful dresses, they are an anthropologist’s dream. Known for their democratic and egalitarian values, they stand apart from the divisiveness of creed and caste that often marks mainstream Indian society.

This isolated and mysterious land of natural abundance is still very much unexplored even today by the outside world, hence, this alluring land of North East India is one of the most treasured eco-friendly sites in India. Moreover, North East has its own charm that will sweep you off your feet. This is where you will find us; this is where we are!

India’s Northeast region is an untouched territory, which is yet not explored completely. Decorated with majestic mountains, lush green vegetation and wild rivers, the region comprise of a large number of tribal groups and tribes. However, each tribal group follows its own distinct culture and speak different languages.

The northeastern region of India includes the states of Assam, Arunachal Pradesh, Manipur, Nagaland, Meghalaya, Tripura and Mizoram. The entire Northeast India is home to several ethnic groups, who have inhabited this region since antiquity. The Northeast Indian tribes are known for their distinctive culture, ancient language, hand-woven dress and handicrafts, all of which are distinctive and most appealing too. Some of the prominent tribes of the northeast India include Nagas, Khasis, Jaintias, Mizos, Boros, and  H. There are 16 major tribes in untamed Nagaland, which shares a border with Myanmar in remote north east India. These villages are just a few hours from Kohima or to the far-off districts of Mon (renowned for having the last surviving head hunters) and Mokokchung.

The Northeast spreads over a vast expanse of 255,000 sq. km with a relatively small population of less than 40 million. The situation in the seven Northeastern states (Assam, Tripura, Meghalaya, Nagaland, Mizoram, Manipur and Arunachal Pradesh), as well as the nearby state of Sikkim, is markedly different from that of the rest of the country. Assam is perhaps the only state where the conditions of indigenous peoples are even partially similar to the mainland. Except for Assam and, now, Tripura, the Northeastern states have a very high proportion of STs as compared to the other states

In general, the condition of the indigenous peoples from the northeast region is noticeably better than the indigenous peoples in the rest of the country. One reason for this is the distance from the mainstream society and the independent control they maintain over their natural resources. However, when they enter other parts of India, they are often discriminated against, based on their facial features which are distinct from most other groups. There is also discrimination between different tribes and against women in indigenous societies; for example, among the Nagas, women do not have equal freedom and rights concerning inheritance.

North-East of India was one political entity named Assam before the rest of the states were carved out of it. The entire North-East of India has been a plot of amalgamation of different cultures and ethnic groups settled here. During the entire British colonial period in India, North East India was ruled as a part of Bengal Province. The state of Assam came into existence in 1874. When India became independent from the United Kingdom in 1947, only three states covered the area. Manipur and Tripura were princely states, while a much larger Assam province was under direct British rule. Four new states were carved out of the original territory of Assam in the decades following independence, in line with the policy of the Indian government of reorganizing the states along ethnic and linguistic lines.

Accordingly, Nagaland became a separate state in 1963, followed by Meghalaya in 1972 and Arunachal Pradesh in 1975. Mizoram became a Union Territory in 1972, and achieved statehood – 88 along in 1987. Manipur and Tripura remained as Union Territories of India between 1956 until 1972 when they attained fully-fledged statehood. Sikkim was integrated as the eighth North Eastern Council state in 2002. Accordingly, the North East Region (NER) refers collectively to the eight states located in the midst of the East Himalayan region, comprising Arunachal Pradesh, Assam, Manipur, Meghalaya, Mizoram, Nagaland, Sikkim and Tripura. The city of Shillong acted as the capital of the Assam province created during the British rule. It remained as the capital of undivided Assam until formation of the state of Meghalaya in 1972. The capital of Assam was then shifted to Dispur, a part of Guwahati, and Shillong became the capital of Meghalaya. The North-east India with over 220 ethnic groups and equal number of dialects makes it a hugely diverse region. The hills states in the region like Assam, Arunachal Pradesh, Meghalaya, Mizoram and Nagaland are predominantly inhabited by tribal people with a fair degree of diversity even within the tribal groups.

Besides the indigenous inhabitants people from Tibet, Burma, Thailand, West Bengal and Bangladesh have migrated into the region at various periods of history. Northeast India constitute a single linguistic region with about 220 languages in three different language groups (Indo-Aryan, Sino-Tibetan and Austric) that share common structural features. Assamese, an Indo-Aryan language is spoken mostly in the Brahmaputra Valley. Among other Indo-Aryan languages, Sylheti, a dialect of Bengali is spoken in South Assam in the Barak Valley. Also there are languages of the Tea-Tribes. Assamese-based pidgin/creoles have developed in 89 Nagaland (Nagamese) and Arunachal Pradesh (Nefamese). The Austro-Asiatic family is represented by the Khasi, Jaintia and War languages of Meghalaya. Sino-Tibetan languages are represented by a small number of Tai languages (TaiAhom, Tai-Phake, Khamti, etc.); and a considerable number of languages belonging to the Tibeto-Burman subgroup. They are the languages of ethnic groups, some of which are: Bodo, Rabha, Karbi, Mising, Tiwa, Deuri etc. (Assam); Garo, (Meghalaya) Ao, Angami, Sema, Lotha, Konyak etc.(Nagaland); Mizo, Hmar (Mizoram); Hrusso, Tanee, Nisi, Adi, Abor, Nocte, Apatani, Misimi etc. (Arunachal). Manipuri is the official language in Manipur, the dominant language of the Imphal Valley; while Naga languages such as Mao, Maram and Tangkul, and Kuki languages such as Hmar and Paite predominate in individual hill areas of the state. Besides the Tibeto-Burman Kak-borak language, Bengali is a majority language in Tripura. Another Indo-Aryan language, Nepali is dominant in Sikkim, besides Sikkimese, a Tibeto-Burman language.

The North East region is connected to the rest of India by a 22 km wide stretch of land (at Siliguri, West Bengal). It shares 2,000 Km. of international borders with Nepal, Bhutan, China (Tibet), Myanmar and Bangladesh

Among the exclusive thing of the rich biodiversity of Northeast India, avian fauna is one of the most outstanding. Available information on avian fauna is reviewed and statistics are pooled together and analysed. Altogether 818 species of avian fauna belonging to 339 genera and 70 households are dispensed at some stage in the Northeastern States. Among the seven the states, Assam harboured maximum numbers of 689 species and 53.49% of total birds species of Indian sub-continent that is followed by Arunachal Pradesh, 646 birds species 50.19%, Manipur 523 species and forty. 61%, Nagaland, 451 and 35.01%, Meghalaya, 366 species and 28.42%, Mizoram, 243 and 18.87%, Tripura has lowest range of 139 species that’s 10.79% of general hen species found in Indian subcontinent.

Hardly a month passes in any of the seven states without a festival or two. Most of them have a religious importance or significance, as the people offer thanks to the Gods for a good harvest or prosperity, or ask for protection against calamities. But these celebrations also help encourage cultural and artistic activities and bring out the natural talent of the people.

The North East India which comprises eight states is strategically important for its international borders with Bangladesh, Bhutan, China and Myanmar. The region is blessed by the Nature and is located at the centre of one of the world’s richest bio-geographic areas. It is famous for her bio-diversity and rich cultural and ethnic heritage. The mighty Himalayas, Brahmaputra river, one horn rhinos, rain-fed forests, pristine environment, wildlife sanctuaries, Bihu, and many more embodiments of the region are just manifestations of this richness that attract the tourists all over the world. The region has immense potential for ecotourism. 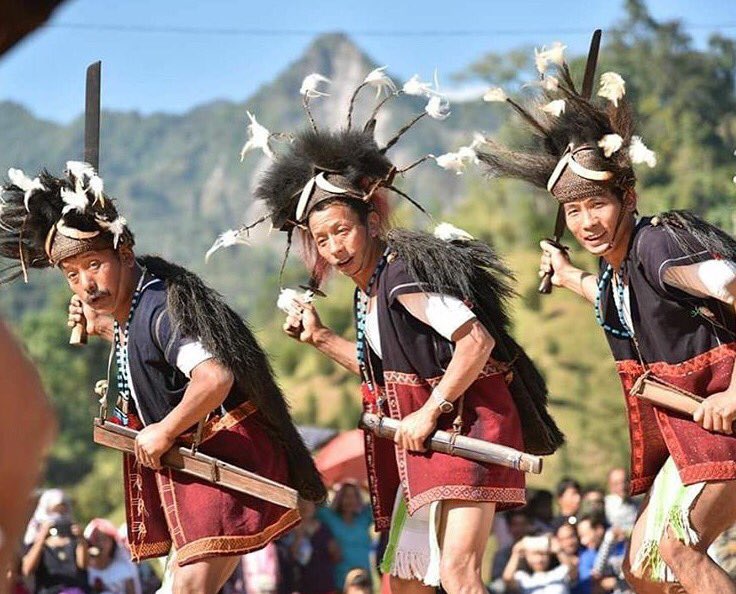 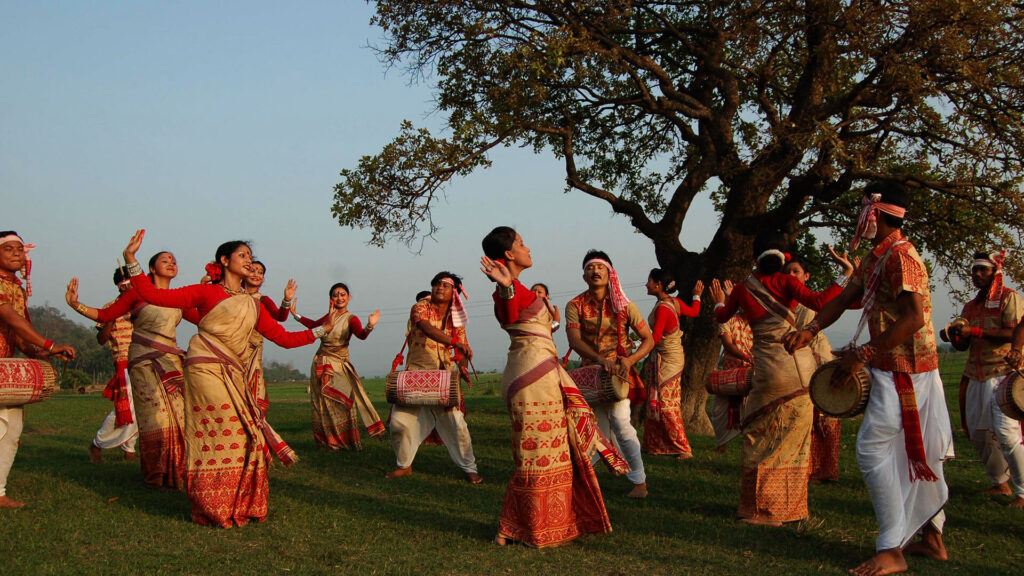 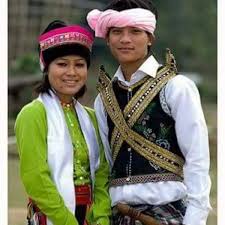 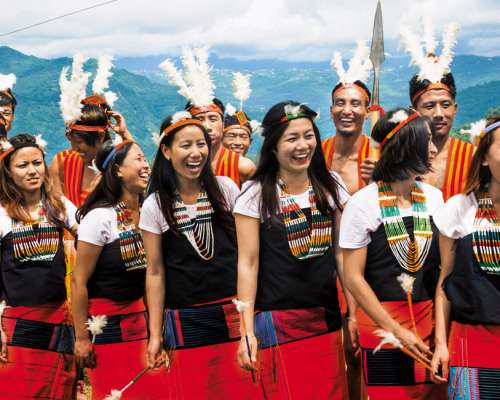 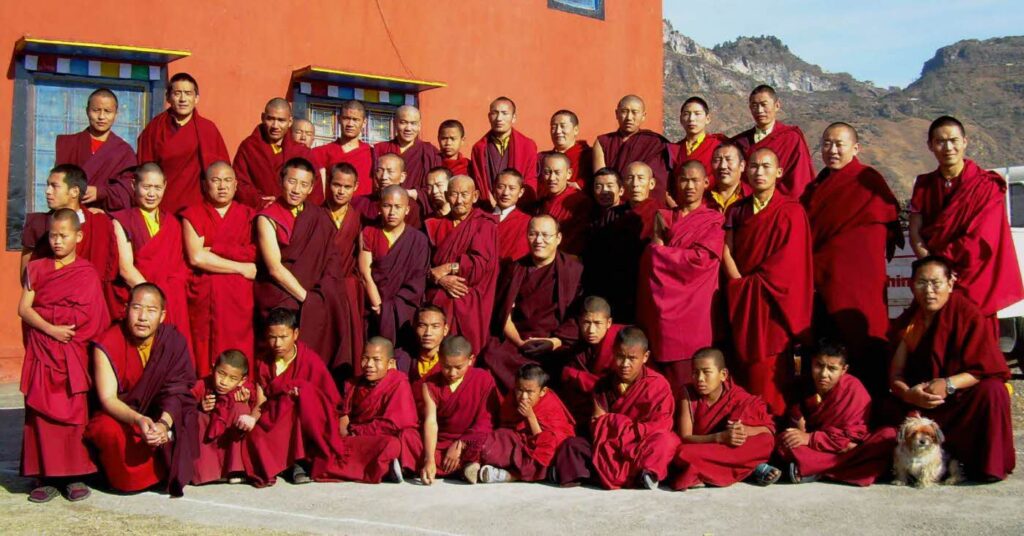 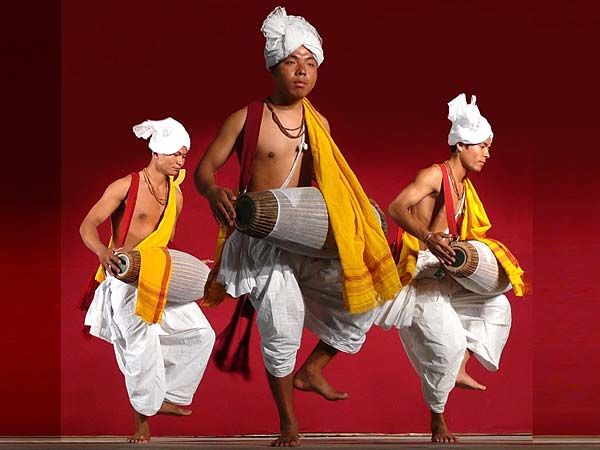 About us
Planning a Tribal Tour to India ?
Request a free consultation and quote
Contact Us
Menu