The main attraction is the Temple itself. It is very old ancient temple(7th century). The River just beside the temple makes it more beautiful. Triveni Sangam of Three rivers Mahanadi (Chitrotpala), Pairi and Sondur. Best time to go in Rainy Season and Winter Season.

Rajim is a unique town Around 40 5KM from Raipur, the sitting at the meeting points of three rivers. It boasts a number of very fine Hindu temples dating from the 8th to the 14th centuries, which are highly revered by both Vishnuites – devotees of Vishnu & Shivaites – devotees of Shiva. The town of Rajim and is one of the most sacred places in the state of Chhattisgarh and the spiritual fervour culminates Each year at the fifth Kumbh festival or Rajim Mela where thousands of telegrams gather.

The town of Rajim stands at the confluence of three rivers, Tamannaah die, piety and Sandhu. Confluence of three rivers is called Triveni Sangam and is considered a secret. This makes Rajeev as a holy city as Allahabad and Varanasi in Uttar Pradesh. In olden days it was an important hold on the pilgrim route, it was a common practice to perform kalpwasi here that is spending a month praying and practising austerities here by the Sangam.

RajeeV is still considered to be an essential stop before visiting the Jagannath Temple in Puri.

The road ends at 7th century shrines. On a regular day, the premise is very peaceful. The temples in white dominates the hue of blue sky, a holy river on the other side and small shops selling items for aarti and pooja. But if you’ve arrived here during the time of Rajim Kumbh, it’ll be a different kind of peace. The one that you get in the middle of a crowd.

If you’re planning to visit Rajim Kumbh 2019 then it is scheduled from 15th February to 1st March. Prefer to book your stay in Raipur closer to the airport area. So far what we know about Rajim Kumbh 2019 is that it’ll be called Punni Mela. About 13 akahadas will be participating in the event this year.

The Rajiv Lochan Mandir was built in 7th Century during the king Vilasatunga’s reign. The temple has meticulous sculptures of many deities, gods and goddesses on the columns, at the entrance and around the premise. Inside the main shrine resides lord Vishnu in the form of god Rajiv Lochan. There are many different avatars of Vishnu around the temple’s premise. What’s really intriguing at this place is the statue of lord Buddha meditating under the Bodh Tree, finely sculpted on a black rock. There is a sculpture of lord Hanuman in orange paint right next to him. Perhaps a hint of time when religions were closing in. In the same premise is temple of goddess Sati and many other shrines dedicated to various deities. 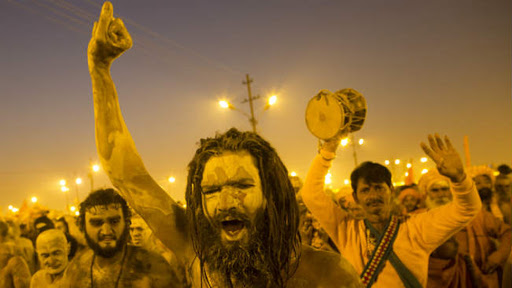 Bhuteshwarnath and Pancheshwarnath temples are near the bank of the river. In addition, Kuleshwarnath mandir is located right in the middle of this confluence of three rivers. Kuleshwarnath temple is an example of ancient engineering marvel as its makers correctly predicted the height of foundation from the river bed. Hence, even at the max capacity the temple never drowns. In a flood during 1967 the temple did drown under water, however there was hardly any damage to the shrine when the water level restored. The engineers in those days were not just great artist but must’ve been smart scientists.

Another fact that makes this place quite interesting is the temple of Rajim Telin. Who was Rajim Telin? Why her name has Rajim in it? Where is Padmavatipuri on the map now?  We’ll come to this story within this very travelogue. But as this story is quite long let’s first talk about Kumbh Mela first.

Kumbh ka Mela, every Indian must’ve heard about it. Bollywood must’ve crossed your mind? Well, this article is on the serious side, so let’s get back to the topic. Kumbh mela is among the most holy festivals of India. Rajim Kumbh started in Chhattisgarh from the anomaly that occurs at Sangam in Allahabad, Utter Pradesh. The has confluence of three rivers also known as Treveni Sangam that lead to the commencement of this holy pilgrimage in Rajim, Chhattisgarh. Rajim Kumbh is organized every year since 2007 and the celebration has now gone massive.

Every year Rajim Kumbh is organized during mid-February and it ends on March during Mahashivratri. The gathering attracts thousands of saints and devotees from across the country. The pilgrimage is one of its kind of celebration that happens in Chhattisgarh. Everyday the Royal Bath, Triveni Sangam Bath, Shobha Yatra and Archana is religiously followed. It is accompanied by a visit to Rajiv Lochan and Kuleshwarnath temples.

Kumbh Mela connects to a deeply rooted believe in Hinduism of that of Moksha. It’s attained when human is cleansed of all sins. It’s then when he/she breaks the chain of body and the spirit, finds liberty in the form of Moksha. The Kumbh is celebrated in every 12 years in Allahabad at Prayag – confluence of Ganga, Yamuna and mythical Saraswati. Conventionally the Kumbh was celebrated at Haridwar, Allahabad, Nasik and Ujjain. Since, Rajim Kumbh started almost a decade ago, it is also known as the 5th Kumbh. It’s the same ideology that taking a bath in Triveni Sangam will cleanse all sins and lead one to the path of mokhsa.

Long back there use to be a city Padmavatipuri in Dakshin Kosala which was doing good in business. Owing to the confluence of three rivers the city was blessed with nutritious soil. Perfect to sow oilseed and it’s farming was central to many living here. The Rajiv Lochan temple was now surrounded by jungles. A king heard about this famous temple and decided to pay a visit. Looking at the sculpture he thought why not take it back to his estate and erect it. The king ignored local’s objection. While crossing the river he faced a storm and drowned.

Rajim Telani who use to work in the oil seed farm found the rock next day. She though it can be an amazing fit to her manual mill, as it requires smooth huge rock to process the oilseed. She was right, the mill gave excellent results and her business picked up in no time.

The king of Padmavatipuri, Jagpal use to pray at Rajiv Lochan temple although it had no idol. When the king learned about the god’s idol at Rajim’s mill, he offered gold equal to the weight of the rock in exchange to her. Well, the first attempt to weigh gold failed. Lord Rajiv Lochan himself directed the King Rajpal to drop his greed, add few basil leaf while measuring. The king followed lord’s advice and this time, he did weigh gold equal to the idol and gave it to Rajim for exchange. The idol was erected again at the Rajiv Lochan temple. One fine day while praying to god Rajim Telin attained moksha. Since then, the ancient city of Padmavatipuri was called Rajim.

Although we’re not sure of how much these story was real but one can’t ignore the fact that confluence does exist. Rajim Telin’s temple still exist as well as the Rajiv Lochan Mandir. Storytelling was an art that our ancestors were well versed with. And it’s always the stories that we grow up with, facts come later. So allow us to drag you off from 7th Century back to 20th.

The journey will be confined to this single location if you’re visiting here during Rajim Kumbh. Otherwise, Rajim happens to be the centre to decide your next route. Abhanpur connects to another religious site in Champaran that can be covered on the way back if you’ve 3 more hours for the trip. Kodar Dam is sufficiently distance to cover a long drive. But we suggest the best drive post Rajim is that to Jatmai & Ghatarani, especially if you’re traveling during September when the monsoon is just about to get over. If you’re planning so, then make sure you start off early.

Is the most revered temple in Rajinder. It was built in the eight century and is dedicated to the Hindu God Vishnu. The sculptures are particularly remarkable examples of the earth that flourished in the post Gupta period. These sculptures include an idol of eight armed Durga, the goddess Ganga, the goddesses Yamuna and the various incarnations of the God Vishnu : Rama, Varaha ( the boar ), Narasimha ( the man lion ) among others.

There are other temples dedicated to various dieties of the Hindu pantheon in the Rajiv Lochan temple complex. Surprisingly there is also a statue of the Buddha in meditation finally carved in a black solid rock.

The smaller Kaleshwar Temple was built in the 9th century on an octagonal platform at the confluence of the three rivers, opposite Rajeev Lochan Temple. It is dedicated to Shiva and it’s shrine has a Swayambhu Lingam – self-created or naturally formed lingam.

Every year, a gathering called the “Fifth Kumbh” or Punnami Mela – full Moon fair is held at Shree Rajiv Lochan Temple. It starts at full moon in January ( Maggie Poornima ) and a special puja is performed at 3 AM, and last for two weeks. thousands of worshippers bath in the Sangam before flocking to the Rajiv Lochan and Kaleshwar temples to make offerings to the gods.

Woman perform a Kalash yatra ritual, walking in line carrying earthenware pots on their heads, filling them with water at the Sangam and taking them to Kuleshwar.

There is also a programme of music and dance.

Rajim is one among the ancient cities of Chhattisgarh and it existed ever since the age of Vedas. The city embraces the confluence of three rivers Chitrotpala (Mahanadi), Pairi and Sondur, a sangam similar to Allahabad, India.

The Rajiv Lochan Mandir was built in 7th Century during the king Vilasatunga’s reign & has meticulous sculptures of many deities, gods and goddesses on the columns, at the entrance and around the premise.

How to reach Rajim

Rajim is about an hour and a half journey from Raipur along a bank of the popular confluence – Triveni Sangam of Rajim, Chhattisgarh. 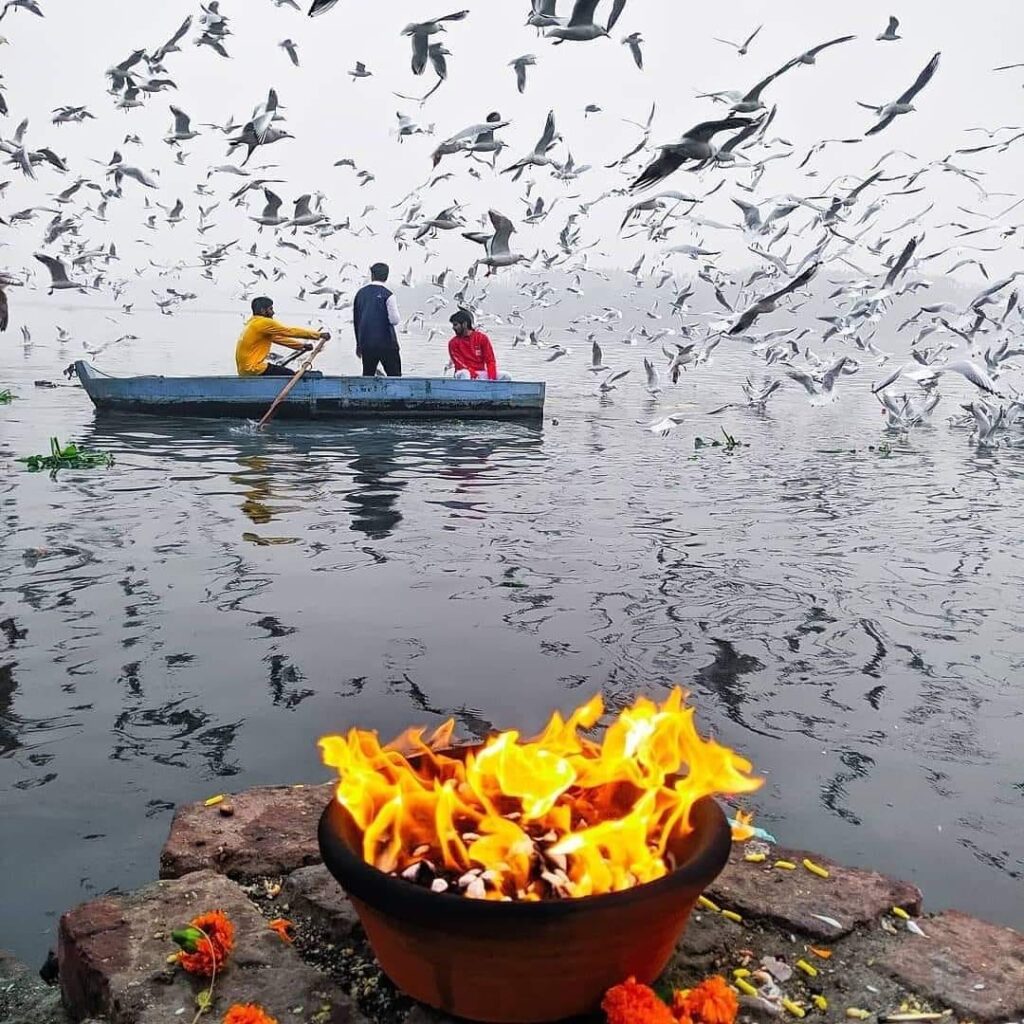