Naga Heritage Village also known as Kisama Heritage Village is only one in Nagaland. The place is wrapped in breathtaking scenic views at the foothills of the lustrous and evergreen hills on the borderline of this village. It is surrounded by all types of flora. Naga Heritage village is rich in its tradition and cultural activities.Visiting this place is an experience of one of its kind and probably different from any part of the country. Its rich heritage speaks volumes about its cultures and customs. The nomenclature of KISAMA is derived from two villages namely, Kigwema (KI) and Phesama(SA) and MA which means Village, on whose land the Naga Heritage Village is established and commissioned by the State Government of Nagaland. 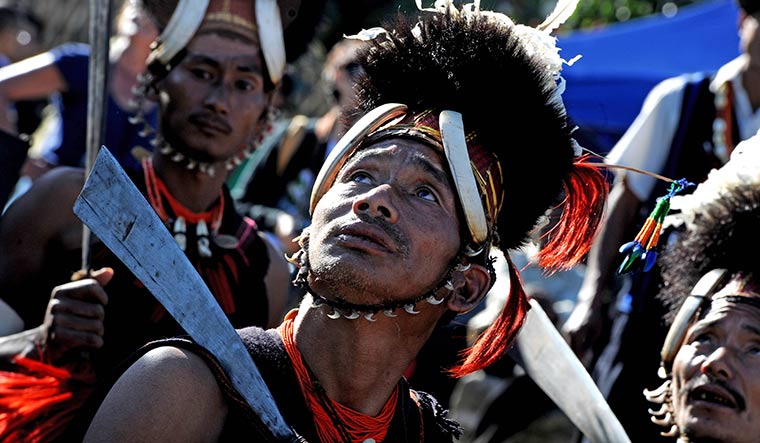 Kisama Heritage Village Entry to the Kisama Heritage Complex is regulated and supervised by the youth of the two villages, which contributed the land on which it is built namely KIgwema and PheSAMA, and from which Kisama derives its name. Depending on the car pass you have on your car or lack of it, the treatment you receive ranges from a deferential welcome to a polite nod towards the general parking lot and sometimes a curt sign that there is no space. As you walk inside, on your left hand side is the Hortiscape – an exhibition space managed by the Department of horticulture where horticultural produce such as vegetables, flowers, fruits, plants and spices and products like pickles, preserves etc. are displayed and sold. Up and ahead on your right is the Bamboo Pavilion, run by the Department of industries and commerce where handloom and handicrafts and foodstuffs of mainly Nagaland but also of other states are sold. The Bamboo craft centre, a smaller structure also houses the display and sale of the same. But, these structures that meet you are not what gets your attention. Rather it is the sound of singing and dancing emanating from the cultural arena – blocked from view by the two-storied Bamboo Pavilion. 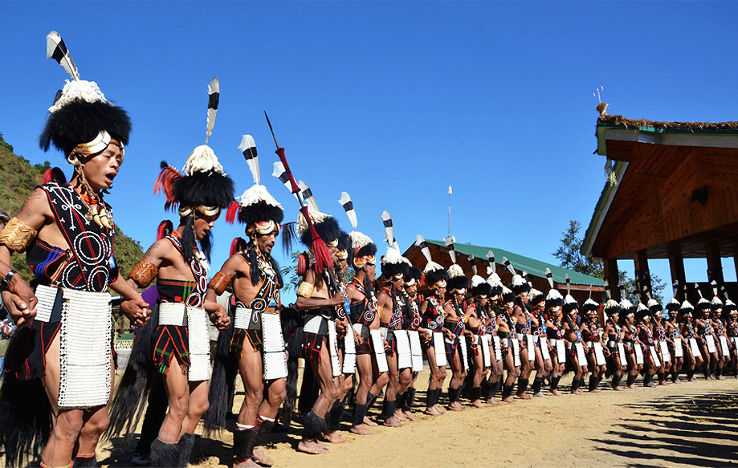 Maybe it is the Naga predilection for music or simply a human response to the sublimity inherent in song but I completely identified with the description of one of my respondents that “the sound of singing makes me feel proud and nostalgic…I feel sad to think that I will never hear this in real life, I mean, I don’t think even now people sing like this in villages, life has changed so much”.

Indeed every year that I have gone, on first entering Kisama, the sound of singing and dancing fills me with a sense of loss – of a time that will never be. I enter acutely aware that this space is one of fantasy, even for me a Naga. I recall my father telling me of his childhood, how his Chakhesang neighbours would sing haunting songs in the evenings and imagine that it must have sounded and felt something like this. There were two occasions when I entered early, before anything had started around 7am and what struck me then was the silence, the absence of any “village” sound – only the random cough or talk of the few participants who were preparing for the day and vehicles coming in. The songs heard by my father were long gone by the time I was growing up in the same home he did. But the sounds of the village remained – like the pigs our neighbours reared and the clockwork chain reaction of roosters crowing at sunrise and cats screeching, dogs barking and people shouting, fighting, laughing etc. These sounds were missing in the eerie silence of Kisama in the morning before the programmes started.

Of the 16 huts erected for each of the 16 recognised tribes, some like the Angami, Sümi, Chakesang, Lotha and Zeliang are in the traditional style of the houses of wealthy men. This is signified by the Mithun style horns that adorn roof of the houses as well as carved wooden panels in the façade. Others like the Ao, Chang, Khiamniungan, Konyaketc are in the style of morungs or boys’ dormitory and house massive log drums which were used in olden times to warn villagers of attacks by animals or enemies. While most huts display their textiles and artefacts; sell trinkets, handicrafts and tools, the Angami, Sümi, Chakhesang (Image 3.3), Lotha and Ao huts serve their tribal cuisines in their huts.In fact the quality of the fare along with space and well-made seating areas for visitors to eat have turned these huts into popular eating and drinking joints for locals as well as tourists. Most huts brew and serve (for sale) rice beer. The pastime is to walk from hut to hut, stopping in one to have tea, another to eat lunch. If one is interested in watching the cultural performances in the arena, the Chakhesang hut – Image 3.3 below is best as it offers a good view. Image 3.3 shows the cultural troupe members of the Chakhesang tribe sitting in the 63 compound of their hut, behind them is the performance arena and to their right is the space for tourists to sit and eat the buffet served there. 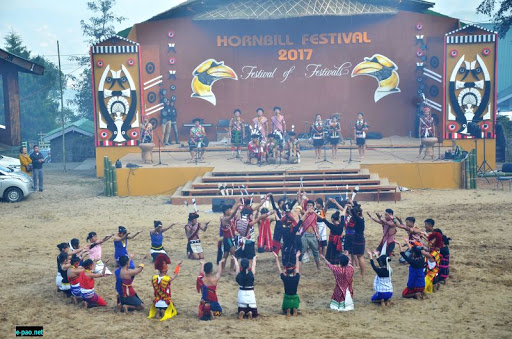 While they are not performing in the arena, troupes come back to their respective huts to sit and display themselves for tourists and locals who are walking about. Often the troupes decide to dance or sing in the small compounds outside their huts; sometimes they do so upon the request of visitors. They pose for photos individually, in groups and sometimes with their visitors. As it gets colder, it is not unusual for see them take out sweaters, coats, and pants to wear over their costumes. Along the peripheries of the ‘village’ space are spread various food stalls, which serve everything from Mughlai, barbecue, and Chinese to Italian and even a pure vegetarian restaurant. Here also, most stalls brew and serve (for sale) rice beer; in some others, alcohols like beer, rum and whisky are available. In the years before 2010, when the Hornbill Rock contest was held in Kisama, this space was very popular and bustling. When the Hornbill Rock contest moved to the town area and further north towards Meriema, there was little reason for tourists and locals, particularly youth to stay on for the evening. The cultural programmes end by 2:30/3:00pm by which time, in winter, the sun has set in Kisama.

On visiting, you will see the unique thatched roofs on the traditionally built houses, its wooden walls and delicately and neatly done carvings of different designs – all of it has an age old rural essence. You will feel living just simply in a different era in your lifetime. This village comprises of Morungs or 16 different houses that are designed and made in such a way that it symbolizes 16 communities of the population residing here. These communities have restored the artifacts of World War II, its food courts, traditionally bamboo made halls and a stadium which is famous for its Hornbill Festival.

The scenic beauty of the village itself mesmerizes the tourists, and thus tourism has flourished in leaps and bounds in the region over the years.Every year in the first week of December, this village celebrates the biggest festival of Northeast, The Hornbill Festival. In other words it is known as the king of festivals. this festival is very important and considered sacred.

Hornbill festival is most sought after in northeast, it is from Dec 1-10 every year. We visited on 2nd of December 2019, and enjoyed the place, Kisama village, heritage village and enjoyed every moment of our 6hour visit to the place. Real Naga culture with the presence of various tribes, their dances, their camps called morung. The stage performances were excellent and the visit to various morungs and finding their food, environment and their welcome to tourist was an experience.

Recommend everyone never to miss the opportunity to visit Nagaland and Kohima during festivities.

I visited from Dimapur, but various home stays and camps are available to enjoy the place at its best.

Visit is only way to feel this unique place.

The delicacy of Naga food , the rice beer and roasted pork, do not miss.

Naga heritage village also known as Kisama Heritage village at Kohima, Nagaland. During Hornbill Festival being celebrated from 1 to 10 th December every year this village looks colorful with festive look. U can see Nagas customs, traditions, and their rich heritage. U can also see unique thatched roofs on the traditionally built houses by Nagas. The village consists of Morungs (huts) belongs to 16 different tribes of Nagas. We can enjoy the scenic beauty of village during Hornbill Festival with foreign and domestic tourists . We can also participate in their dances, music. Worth visiting.

The heritage village is about 20 minutes away from the capital district of Kohima. One can find private and shared transport from BOC Bus station. There’s a small entry fee of 10 rupees for individuals ane 10 for your camera/mobile decices for entering the village. Inside there is a museum, a stadium (where hornbill festival takes place) and a home from each of the major Naga tribes to showcase their rich exotic looking hut building styles. We were lucky to ve there on the day of pre-harvesting festival and the organizers were very generous to call us in for lunch.

This place is absolutely recommended from my side.

Welcome to Hornbill Festival 2019,Hornbill festival is an annual event held in Kisama Heritage Village in Nagaland, a tribal state in India. It usually runs from the 1st – 10th December of every year and celebrates the culture and heritage of Naga tribes.It is also called the ‘Festival of Festivals‘. India’s Far North Eastern state. Locals celebrate the fiesta with much enthusiasm and zeal. The festival is named after Hornbill, one of the most venerated bird species in the state.
It’s predominantly a festival to promote tourism to Nagaland and has done an amazing job. Hornbill is now a major event which should be on any traveller’s calendar when they find themselves in North East India.

During the festival you can get up close and personal with 17 major tribes of Nagaland. These are;

Watch their showcases of singing, dancing, sport and even tug of war! Sample local Naga cuisine, drink rice beer, play with traditional instruments, get cosy by the campfire of the Morungs and rock out with the locals once the sun goes down.