Maharashtra has a large tribal population. The state is home to almost 50 tribes, with the main ones being Bhils, Gonds, Mahadeo Kolis, Pawras, Thakurs and Warlis. 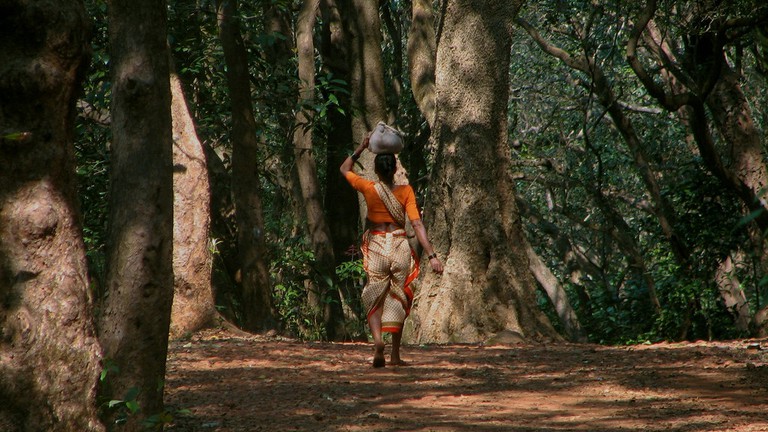 Maharashtra has a large tribal population. The state is home to almost 50 tribes, with the main ones being Bhils, Gonds, Mahadeo Kolis, Pawras, Thakurs and Warlis.

The Warlis Various tribes, including the Warlis, live in the rough and rugged terrain of the Sahyadri Hills. Physically, they tend to be short and scrawny with dark complexions. They lead a very basic existence which depends primarily on agriculture and forest produce because their deep reverence for nature translates into an unwillingness to take from the mother earth more than what is required. A Warli family hut is built like a square cube – dark and windowless. Within it, is another walled square area which serves as a kitchen. A narrow strip on one side of the hut is demarcated for the cattle. Men, women and animals inhabit the same space.

These tribal communities prefer to live in self-imposed isolation shunning contact with people residing in the plains. And though they have lived for generations in close proximity to the glittering metropolis of Mumbai, their mythic vision and way of life have been centuries apart from the materialistic concerns of the city dwellers. In the last few decades, however, the quality of their life has vastly improved and their reservations towards others except their own have lessened.

The Warlis are vague about how they came to occupy their present location. Their remembered history tells them that after their forceful eviction from their homeland in northern Gujarat, they settled in the hilly areas along the border of Gujarat and Maharashtra. Over time, they have adopted a dialect of Marathi as their language and their dress and ornaments also exhibit the influence of Maharashtrian customs. The most powerful individual in the community is the bhagat or the priest-cum-medicineman whose presence dominates and directs their lives.

The Warli religion glorifies the great mother who is venerated in the form of the Earth Goddess as well as her emanation as Kansari (the Corn Goddess) and Palghat (the Goddess of Vegetation and Fertility). Interestingly, their songs describe the conflict between the dark naked Mother Goddess and the Vedic God Indra. Her humiliation and his victory are reflected in the absorption of Hindu deities like Narayandev into the Warli pantheon. They all co-exist in harmony. In addition, the Warlis offer worship to the four household gods who look after their small needs and shield them from harm. These household gods are hung from a horizontal pole in the kitchen. Just as the household gods safeguard the Warli home, the family fields are protected by their ancestor god known as Vira, while the chief ancestor Chheda, watches over the entire village. The most awesome among these male gods is the ferocious Vaghdev – the Tiger god who provides security to the area covered by three villages. He has to be propitiated from time to time to avert his wrath. His images are sculpted in low relief on a wooden or a stone slab and placed outside the village boundary.

Warli art received recognition when it was freed of its hieratic connotations and presented as an art form on paper. In its new dispensation its forms became varied, animated and expressive and even slightly naturalistic. Interestingly, the works that received high acclaim were by Jivya Soma – a male member of the community and not by the women who regarded the art form as their traditional forte. In fact, several male artists continue to enact in white paint on paper, vivacious portrayals of the life they lead and the world they experience. Jivya Soma has exhibited his works internationally and is able to sell them at high prices – sometimes as much as Rs. five lacs for one painting.

Keep
In Touch
More about maharashtra
Planning a Tribal Tour to India ?
Request a free consultation and quote
Contact Us
Menu