Tribal tattoos have been used for years as a symbol of all humanity.

Discussed here are the tribal tattoos as part of tribal’s socio-cultural life and the reason for wearing tattoo, the different types and the processes of making tattoo designs and its care, the significant of tattoo as related to culture and tradition, and a look at tattoo in the new millennium. Tribal symbols vary, reasons for tattooing were generally the same; ranging from marriage and rite of passage. In tribal communities of Odisha both men and women like to tattoo their bodies and children as young as 5 years are found with tattoo marks on their bodies and faces.

"Tribal" is the word used in India to refer to inhabitants known elsewhere as "indigenous". British ethnographers classified tribals as "animists". As per the National Census, they are classified as "aboriginals" and listed according to the tribe. The Hindi word for tribal is adivasi, meaning "ancient inhabitants". India’s culture is among the world's oldest and the civilization in India began about 4,500 years ago. 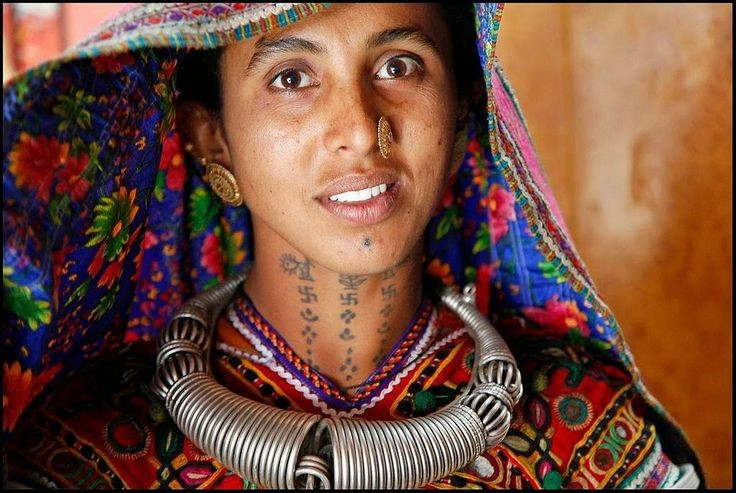 The Ethenographics of 'Inidan Tribal Tattoo'

India is home to many tribal communities and the ribals of Inia are a distinctive race with strong traditional knowledge base in different aspects of their culture and livelihood.

Tattoos have been used for thousands of years as a symbol for all humanity. Tattooing has been practiced from prehistoric time.

It is evident that, in 1991 a five thousand year old tattooed man called Ötzi the Iceman, is a well-preserved natural mummy of a man who lived about 3,300 BC. Ötzi had several carbon tattoos including groups of short, parallel, vertical lines to both sides of the lumbar spine, a cruciform mark behind the right knee, and various marks around both ankles.

It has been speculated that these tattoos may have been related to pain relief treatments similar to acupressure or acupuncture. If so, this is at least 2000 years before their previously known earliest use in China.

In Indian context, tattooing has variety of reasons and beliefs. Generally, tattoos are used to keep their indigenous identity among other tribal clan. The local tattoo makers visited different villages to perform their art and earn their livelihood. For instance, In Chhattisgarh, the community called Kothuna or Godharins who makes their livelihood from traditional tattooing practice. They are very knowledgeable about the different types of tattoos preferred by various tribes. The art of tattooing, working procedures, raw materials, techniques and relevant knowledge passed by their mothers generation by generations. Unfortunately, little importance has been given to the essence of such skill due to change in life style and urbanisation. So, in this respect priority should be given to the indigenous traditional knowledge. Documentation and developing the knowledge base of this indigenous traditional knowledge is the need of the hour. Since, the present investigation was conducted to study the cultural and health significance of traditional tattooing practices among tribal community in Chhattisgarh state, India. The documentation of these practices is valuable for future generations and scientific consideration of its wider uses in human health.

The socio-cultural life of different tribal communities of Odisha is affluent with their own folk songs, dances and their traditional tattoos. Tribal culture of Orissa is well depicted in its modern city in form of poems, art and craft or music. People of different tribal communities of Odisha have tattooed their bodies with a variety of symbols showing their religious beliefs, status symbols, declarations of love, or even different forms of punishment. The tradition is to apply the tattoos by hand, and this skill is passed on from one generation to the next. The tattoos done by the experienced tribal tattoo artists show their endurance and dedication to the cultural traditions. Generally the Tribal Tattoos symbolize individuality, experiences, status, religion, and art and they come in many shapes, sizes, colors, designs, and styles. Tribal tattoos were looked at as mythical creatures.

Tattooing is one of the popular arts of body decoration among the tribals. Tattooing is a permanent mark applied on the body of an individual as a symbol of socio-cultural practice or personal interest body decoration. The tattoo marks are drawn on one’s body by pricking pigments into the skin. A needle or bunch of needles are disposed into a typical indigenous solution and then are injected to the skin. It is widely popular among the tribal people of Odisha. The designs were different for men and woman. Most of the girls and women of the tribal communities are tattooed. In older days, it was a shame for the Kandha girls not to have tattooing marks on their face to be essential tattooing is considered recognition basically it was compulsory for the young maidens after marriage. The tribals of Odisha treat the tattoo marks as worthy of social importance. The Chirlya (bird) mark must be borne by a Bhill woman prior to her marriage and is always tattooed at the side angles of the eyes. Sometimes the tattoo marks signify the specific tribal community of the bearer and it is a symbol of the clan and the identification of the person. Tattoo marks are connected with the magical ideas. A black dot on the forehead of chin protects women folk from the evil eyes. The absence of tattoo marks among the women of some tribes considered to be inauspicious. There is a belief among the Bhills that the figures drawn on the body are the evidence of good deeds which go with a person to his post mortem existence. Tattooing is widely popular among the various tribals for various common purposes as follows: • Social sanctions • To develop the ethnic identity • To have a religious sanction • Self mutilation, self sacrifice to the unseen powers and purity of the body • Distinct from the male identity • Concept of beauty in tribal society is an astronomic knowledge which is unknown to us

Women are used to tattooing on visible parts of their bodies. It is believed that the origin of tattooing was being sought in the fear of abduction of women. On the other hand, it is seen the tribal people believe they will memorize their ancestor after death by the similarities of the tattoo marks they have. The instruments tattooing consists of some tools of pricking the colour pigments and the healing medicine. Colour pigments are prepared from the juice of different forest plants. Tattooing is common among many traditional communities especially among the Kandhas of Odisha. They believe that tattoo develops resistance power in the body. Kandhas tattoo their hands, feet, forehead, and legs as mark of decoration. Both the males and especially females adopt the habit of the tattooing. They tattoo their bodies in the nearly weekly markets and the persons who draws comes from far and distant places. The men among the Gond tribe prefer to make tattoo marks on the out sides of legs at knee level and sometimes on the upper arms.
The professional tattooist or tattooing women are found in the tribal societies of Odisha mostly in southern and middle Odisha. They practice the tattooing for their own clan, matters in family. There are two occasions during the birth, marriage and death rites, the tattooing taken up. The Savara tribe of Odisha used to practice tattooing called “Chitakuteiba”. The Gond and Kandha tribe call it “Bana Godana”. Women of Kandha communities of Odisha are well known for their decorative tattoos on the face, which as per their belief identifies them after death with their own relatives.
The tribal girls tattoo their whole body with complex artistic expression. It is believed that ornaments don’t help in promoting virtue but it is the right action with a person and the tattooing in the body is counted to judge one’s virtue. Some Odishan tribal people like the Juang and Kandha women decorate their bodies with tattoo marks which having significant values. The painting of tattoo marks on the body is painful, but once accepted as a social custom and the young girls were compelled to pain their bodies. The Kandha girls are seen painted with tattoo marks, here the graphical line are drawn representing different flowers, stars, moon, sun and some magical forms and motifs etc. The linier lines are curve, parallel, zigzag, crossed diagonal and straight. In the ancient Kandha tribe the ladies paint tattoos on their faces to avoid projecting their natural beauty. For the special tattoos, the tribe is known as Kutia Kandha. The Kutia Kandha women are readily identifiable by their geometric facial tattoos that on close observation bear striking similarity to tiger’s whiskers. These identifying marks ensure they will recognize each other in the spirit world. The Gadava women of southern Odisha are traditionally distinguished by their facial tattoos. Tattooing is popular among the Bathudi women. It is called “Khada”. According to their traditions, prior to marriage, a Bathudi girl tattoos one or two floral designs on her forehead or arm. The tribals’ believed that a man is incomplete without tattoo marks. They try to complete their life through the unseen powers which are evidently marked in their tattoo.
Now days due to the effect of social change, modernization, westernization, the tribals have forgotten their own traditions. Due to the effect of urbanization they have left their home land and attracted towards a new culture. Tattooing is practice by the tribals in less number. The purpose of tribal tattoos has now changed, and it is now considered as fashion, it is used to beauty. Some of the socio-culturally significant beautiful and well designed tattoos of different tribal groups are no more used by the concerned community men. Due to socioeconomic transformation and changed in their religious life, these unique designs have disappeared from the concerned tribal groups.